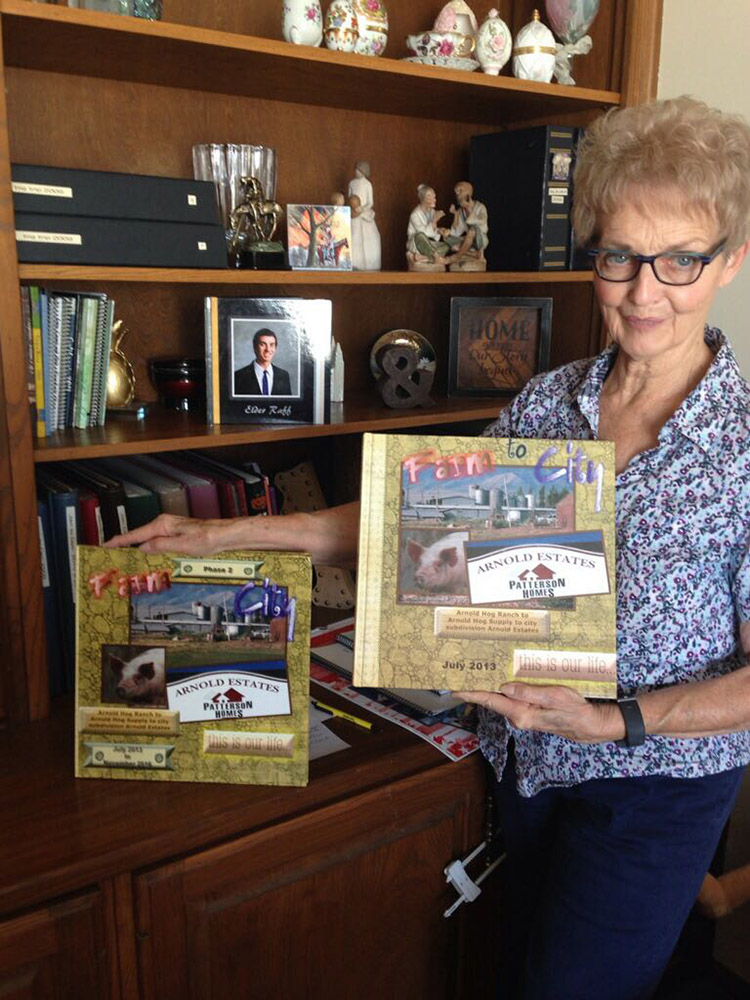 Lehi’s Lu and Jon Arnold have been married fifty-nine years in November. Both started their lives in Richfield, Utah but didn’t connect until 1955 at church in Salt Lake City. Shortly after starting to date, Jon left for Army training at Fort Ord in Southern California. A few weeks later, his brother Norris, left for his mission to Denmark. At the train station, Jon’s brother said, “Make sure I am back for the wedding.”  That is the only proposal Lu ever got. It was just assumed they would marry when Jon’s brother returned in three years.

Making hog farming a life-time occupation was not in the plans for the Arnold couple, but the two brothers bought three “Landrace” breed pigs in Idaho on December 20, 1958, and in an unfortunate trailer accident lost all three pigs. Not to be deterred, Jon and his brother went back to Idaho a year later and bought three more pigs–that was the beginning of the Arnold pig dynasty.

Lehi City was not about to let the Arnold’s build their home on their pig business but in an unprecedented plea, fellow Lehi resident and farmer, Merrill Fox, spoke in favor of the operation. “How many pigs do you want to raise on your farm?” asked the City. Eventually, the City authorized the Arnolds to have two thousand pigs.

While Jon was raising pigs, Lu was raising two children, Lloyd and Sally, and working full-time. Lu found a good job after graduating from Stevens- Henager Business School. She worked for Sperry Univac, where she was promoted to assistant to the Marketing Director. When Sperry moved to the East Coast, Lu worked in personnel at Murray First Thrift, Christensen Diamond, A.D.D.S and eventually WI CAT, (Worldwide Institute of Computer Applied Technology.)  Lu loves computers and her grandchildren call her “our techie grandma.”

Lu taught herself the fundamentals of the computers. She claims, “If they would have had computers when I was young, I would have loved to be a computer programmer.”

Meanwhile, the Arnold Pig industry grew into three farms, one in Lehi, one in Bicknell, Utah, and one in Clarkston Utah. The Arnold pigs were sold to the University of Utah and the Veterans Hospital for heart research. “A pig’s heart is the closest to a human heart,” said Lu. She also became the Utah Pork Producers Promotion Director for the local pig industry, giving presentations all over the state to schools, business leaders, and other organizations.

As Lehi grew, the pig operation became less and less a desirable business. Lu remembers with angst an LDS fast and testimony meeting when two ward members complained to the congregation about the smell of the pig farm. After fifty years, the family decided to sell the farm land to Patterson Homes.

Scrapbooking, first paper, now digital, Lu always loved scrapbooking. She would take many pictures and put them into books. About the time farm life became a memory; the Arnolds were called as volunteers to the Utah State Prison where they taught inmates how to search for their ancestors. “We loved it,” exclaimed Lu. The couple also worked for four years in the Timpanogos Family History Center. Creating ways to save photos and memories became a passion for Lu.

Combining her acumen with computers and love of scrapbooking, Lu created books for many occasions. She used a program called “Creative Memories” where she could download pictures into already formatted pages and create books. She expanded her proficiency into a program on “Forever.com,” where she is an ambassador.  Her expertise is used by those who wish to create digitized memories. “With this program, there is a lot of flexibility,” said Lu. “Once the information is collected and digitized there will always be a venue for it,” she explained.

“I have made over 40+ books chronicling life stories, weddings, cookbooks, vacations, missions and calendars,” Lu said. And she’s not slowing down, her latest endeavor was a book for the Olympian Club, in which she is a member. The book was given to each member at the group’s closing social. She worked closely with Josephine Chatfield to find something for every year of the club’s existence. “We also got it boxed, labeled and submitted it to John Haws at the Lehi Historical Society,” she added. Along her nearly 80- year journey, Lu and Jon have created many wonderful memories and now they can keep and share them with family and friends forever.