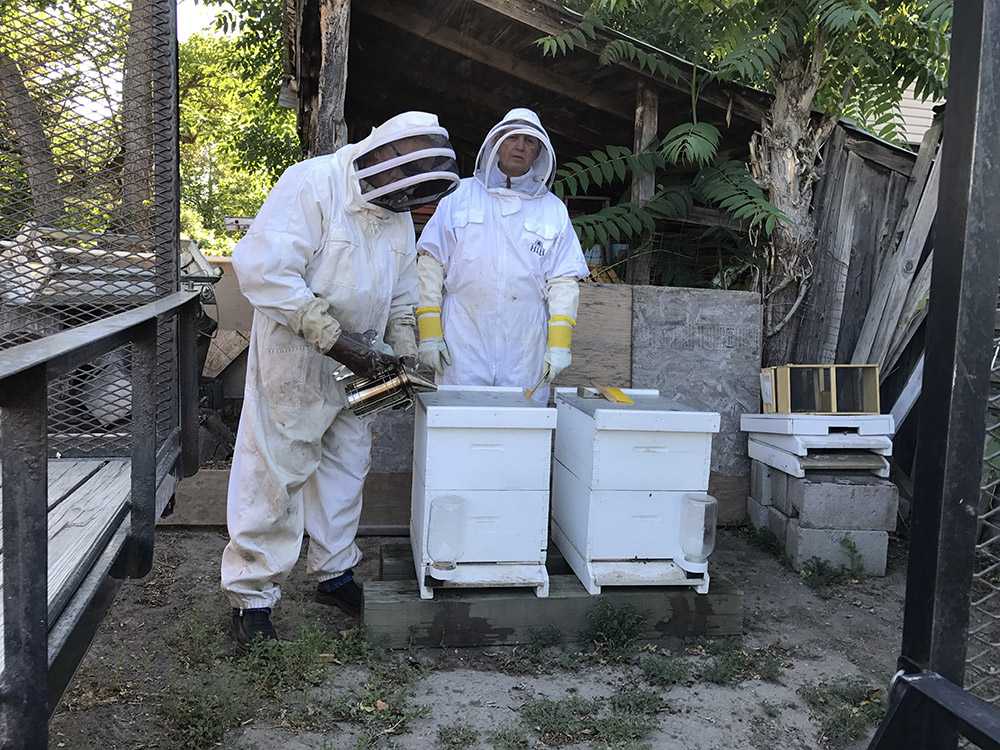 Beekeeping is becoming increasingly popular in Lehi but it is not an easy undertaking. Most backyard beekeepers are also gardeners who want to maximize pollination in their crops. Harvesting honey is a delicious bonus of successful beekeeping.

Although bees have been around for thousands of years, beekeeping became popular in Utah in the 1800’s as settlers needed honey and beeswax for their own use and as a trading commodity. Disease was a common problem leading to the founding of the Utah Beekeepers Association in 1892.

Lehi’s development code was altered to allow beekeeping about 15 years ago thanks to the efforts of former Lehi resident Lee Knight, who is a local expert.  In 2016, resident Connor Boyack approached city officials asking to change the code to reflect current best practices such as placing hives near a 6’ barrier wall and providing an on-site water source. Those changes also allowed for greater flexibility in hive size and quantity.

Most beekeepers are gardeners and successful gardens depend on pollinators. Bees are the most efficient and useful pollinators as they go about their business collecting nectar from blossoms. The three beekeepers interviewed for this story, Connor Boyack, Sam Wycherly, and Dennis Beck, all reported increased garden production when they added bees and noted the biggest change in their raspberry crops with production increasing by three times. Since bees have been found to pollinate in an area up to four miles from the hive, local beekeeping efforts benefit and affect the entire community.

Connor Boyack keeps bees to help pollinate his garden and his orchard of almond trees. | Photo by Kaye Collins

In the early spring, a beekeeper checks the hives weekly to ensure that the queen bee is healthy and laying eggs. Each hive has only one queen. During the summer when the bees are working at full capacity, beekeepers avoid unnecessarily disrupting the hives, but keep a close eye on things to spot early signs of disease. In the fall, beekeepers check the hives more often to assess health of the hive, amount of production, and readiness for harvest. Honey is generally harvested in late September or early October. Many beekeepers wrap their hives to provide some insulation against Utah’s cold winters. Having a hive survive the winter is a victory.

Lehi beekeepers watch carefully for signs of disease in their hives. In our area varroa mites are the bees’ biggest foe. These tiny parasites allow bacteria and viruses to infect bees. At the first sign of mites, local beekeepers often try the least invasive method of treating the hive which involves dusting the hive with pure powdered sugar. If that treatment is not successful there are chemical miticides, but they can contaminate the honey so they are used sparingly. Since mites have a 10 day lifecycle, it is a problem that requires constant vigilance.

The fact that bees can sting is scary to people with phobias and allergies, but bees are not aggressive. They normally try to avoid interaction with humans but will sting when the hive is disturbed or when they are threatened. Wycherly and Boyack say that they haven’t had any issues with neighbors. Beck had one neighbor who was concerned about the bees, but after an uneventful summer and the gift of a bottle of honey in the fall, they haven’t had any further concerns.

Beginning beekeepers will find classes in our area each spring, and seasoned beekeepers are happy to give advice. For those of us who aren’t ready to commit to having beehives in our backyards, we can attract bees and help them be healthier by providing a wide range of flowering plants in our yards.