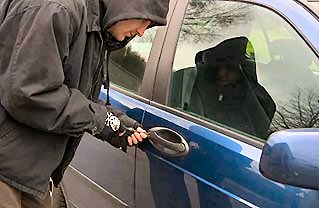 One month into the summer season, vehicle break-ins are up across Lehi, especially in the Traverse Mountain area. The Lehi Police Department (LPD) advises a few precautionary measures to protect vehicles and the valuable inside from thieves.

“It’s often a crime of opportunity,” said Lt. Jeff Swenson of the LPD. “Thieves want to be able to grab it and go.” He advised keeping cars locked, bringing valuables in from the car, or at least hiding them out of plain sight, and closing garage doors.

Thefts out of vehicles tend to go up in the summer months. Lt. Swenson asked residents to keep an eye on their neighborhoods. “If you see anything suspicious – [such as] a suspicious vehicle with people sitting in it, or they’re on foot and it’s late – call us and let us check it out.”

In addition to thefts of valuables inside cars, there have been several thefts of vehicles too, “We’ve had situations where people leave their car unlocked, keys in the ignition, their garage is open,” Lt. Swenson said. “We’ve had people go in and steal the car right out of the garage and within an hour they’re using credit cards.”

Swenson has been working in Lehi for a long time and wants people to realize that it’s not a small town anymore, and that means residents need to be more cautious with their vehicles and valuables.

Residents in the Pointe Meadows neighborhood report that car thieves in the past several weeks to seem more interested in taking car registrations than vendible items. Pointe Meadows resident Julie Youngblood-Roper had a car broken into, and she said she knows of several other neighbors who experienced the same thing.

“I thought we wouldn’t be a target because our cars really aren’t that fancy,” she said. But even so, her husband’s car was broken into, with the glove boxes opened and papers strewn about the car. They were fortunate though. “I had everything with me,” she said. “It was just the luck that I was going with everything the next day to register the van, so there wasn’t anything with identification that could have been used.”

She said they always lock their cars because the garages in the townhouses where she lives were built too shallow for a minivan to park in, so they have to park outside.

Lt. Swenson said when car thieves are going for registrations, it’s most likely for the personal information and victims should be very aware of the possibility of identity theft.