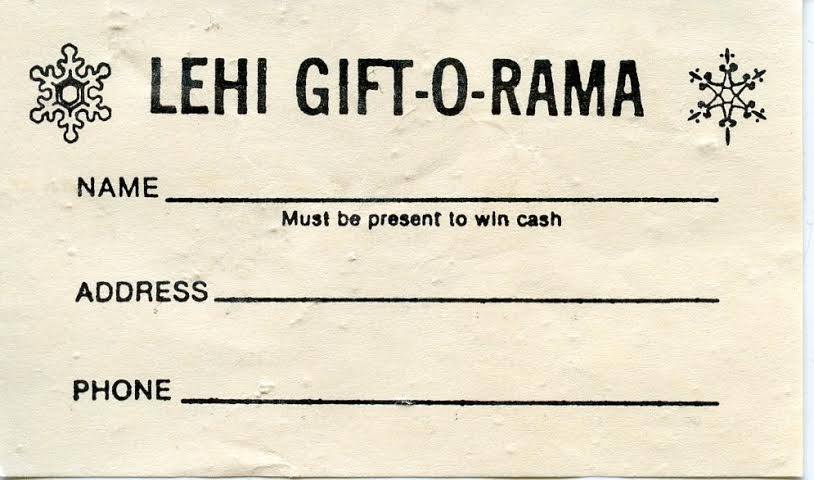 If you grew up in Lehi and you’re over 45, you may remember a wonderful event held every holiday season called “Gift O Rama.”  Lehi merchants gave shoppers one Gift O Rama coupon for every dollar spent in their store from Thanksgiving through early December. Local shoppers added their name and phone number to the coupons and dropped them in boxes at all the local stores.

I remember crinkling the corners of the coupons or scrunching them just a little, in hopes that our coupons would get drawn. All the coupons were gathered and placed in a big drum that was kept at the State Bank of Lehi on Main Street.

Then, the exciting Saturday in December afternoon finally arrived. It was time for the Gift O Rama drawing! As a kid, it seemed like everyone in town showed up at the parking lot between the post office and the bank, right on Main Street between Center Street and First West, to see if they would win a prize. It was so exciting! We were always bundled up for the winter weather and all of us crowded together, each hoping to win the big prize-$500 in cash from the bank!

Each year, the Lehi Chamber of Commerce organized the big event. All the local merchants donated prizes. I remember Alvin Schow and George Laney drawing the winners’ names, or the beautiful Miss Lehi that year. The winners had to be present to win, so there was great motivation to attend.

One memory that Jan Fowler Roberts mentioned about Gift O Rama is especially sweet. She and her husband Ron, were newlyweds on a tight budget. She needed new scriptures, but couldn’t afford a new set. Jan won one of the big prizes that year– a $100 gift certificate to Broadbent’s! This is how Jan got her new, personally engraved scriptures. “I was so thrilled to finally have scriptures of my own,” Roberts said.

One year the Fowler family won a small black and white TV from Hutch’s, which we carried home proudly. We thought we were the luckiest people in Lehi. Prizes were as varied as the stores in town. Hutch’s would donate a new appliance. Powers store would donate a new coat. I remember Mr. Ekins from Lehi Drug donating an alarm clock and other household items that were sold in the store at the time.

Gift O Rama was a wonderful local tradition for many years, which brought our whole community together, and added to the excitement and fun of a small-town Christmas in Lehi.