Skyridge Collects for Sub for Santa 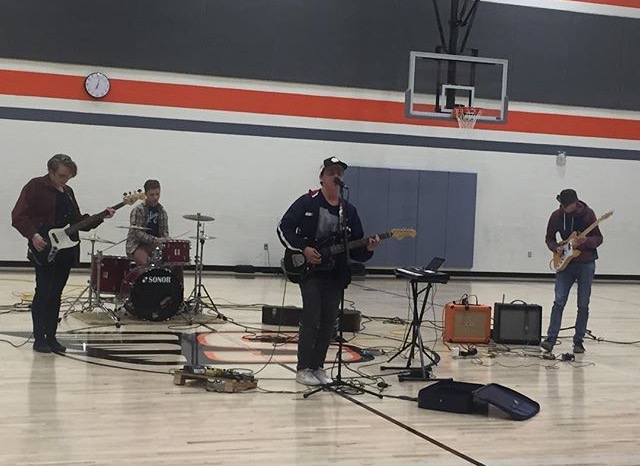 This December at Skyridge High School, we have decided to get into the holiday spirit by starting a Sub for Santa program. The money raised by our Sub for Santa program will go to helping buy children in our area presents for Christmas. We decorated the entire school top to bottom for Christmas and have been collecting money donations from students every day in our mega piggy bank. Various activities have been going on throughout this past week and will continue to happen for the rest of the month.

On Wednesday December 7th, we held our first Sub for Santa donation activity which was a “Battle of the Bands.” A variety of bands from Skyridge’s impressive student body worked hard in preparation and competed against each other to be named the top band of Skyridge High School. We had all sorts of music played from a-cappella to indie alternative rock music. Our winning band was “Mainstream.” Mainstream has been a band for the past couple of years and has been successful with performing at many gigs and venues throughout Utah. They have even released a couple songs on iTunes. The band consists of Dallin Hunt- singer, Connor Harris- drummer, Ethan Dixon- bass guitar, Easton Fielding- piano, and Jackson Rogers- guitar.

It was a lot of fun to hold Battle of the Bands at Skyridge High School this past week. We are so excited for our other events and hope they go just as well. This Wednesday we will be having a movie night for all students to attend. We will be selling hot chocolate and adding that earned money to our donations to Sub for Santa. We will also be having an awesome assembly on Friday with many different challenges to be completed. As each challenge is completed or not completed, the volunteer challengers will donate money to our Sub for Santa Piggy Bank. Throughout the assembly the students can donate money, and if certain goals are met they will earn fun things like extended lunch. We are so excited for these events and encourage you to donate to Skyridge’s Sub for Santa, and help provide a great Christmas for Lehi children.

Related Topics:educationlehi free press
Up Next