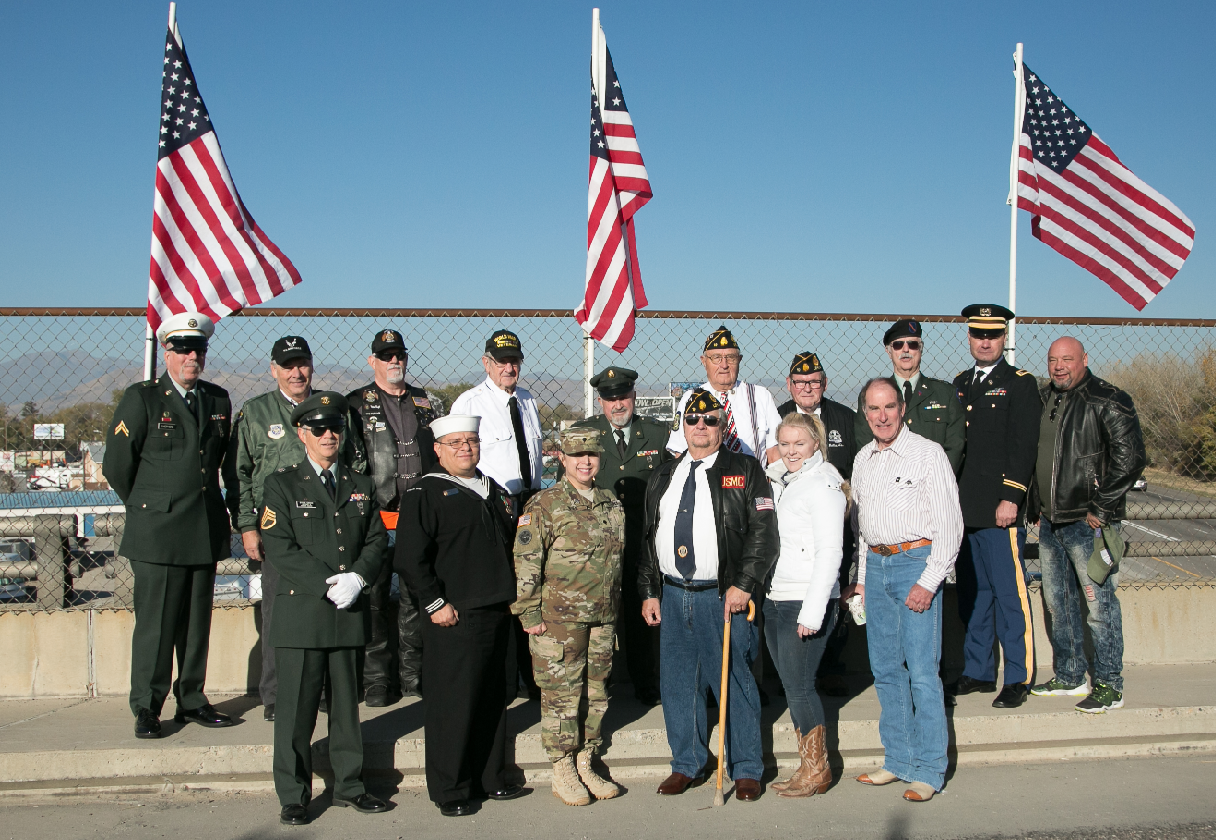 About forty people were present at the Bridge of Honor ceremony on the 5th East Bridge which spans I-15 at 8:30 a.m. on Friday, November 11. More people attended throughout the morning, coming to stand and take a moment to show gratitude to veterans. The bridge looked beautiful and was lined with not only American flags, but flags representing each branch of the Armed Forces.

Jonathan Walker, the chair of the “Standing Quietly” event for the American Legion, welcomed the crowd. “Today this bridge is special because it is our bridge. It is for the veterans and especially for our buddies who have passed on. We thank those who have served and their families as well. We honor them. We remember them. Thank you for being here and sharing this day with us.”

“It is an honor to be here today,” Mayor Bert Wilson said. “I have a great deal of gratitude for those who served and those who still serve this great country. My own father was wounded in war and lived a life of pain and anguish. I didn’t fully understand his sacrifice until the Vietnam War era. Our veterans were willing to sacrifice their lives, their minds and their bodies that we can have freedom.”

Two years ago Walker felt he needed to do something special on Veteran’s Day, so he put on his uniform, went to the 5th East bridge, and stood quietly at attention for about two hours. His action drew the attention of traffic flowing beneath the bridge and past him as he stood on the sidewalk. It also touched the hearts of other veterans. An Army vet named Becky said, “I saw it on television a couple of years ago and it bothered me that he was standing alone. I came to stand side-by-side with these other veterans today.”

“My friend told me about this event,” said Philip Hansen, a Canadian who served in the U.S. Army and has lived in American Fork, Lehi and currently lives in Saratoga Springs. “I love this country and what it stands for. We need to get back to basics and find some balance. It is good to stand together.”

Julie Strong just moved to Lehi from Riverside, California and she brought her four young children to the bridge ceremony. They stood quietly with their hands over their hearts as they watched the veterans. “It is important to take a moment to honor our veterans, “ Strong said, “And I want to teach my children how to show their love for this country.”

The bridge was closed until 11:30 a.m. to allow veterans, citizens and school children to safely mingle and celebrate the freedoms we enjoy in our country. More than one veteran got misty eyed as they were thanked for their service by children who were present.

Jack and Jill Lanes in Lehi and A.F. Robbed, Vandalized