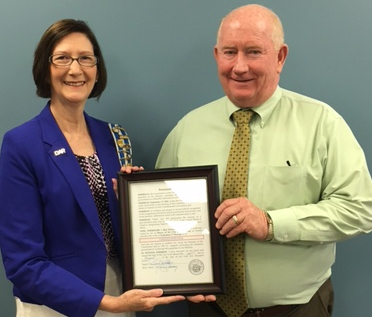 Katie Madsen, Lehi resident and Regent of the Wasatch Range Chapter of the Daughters of the American Revolution (DAR) recently met with Lehi mayor, Burt Wilson, to sign a proclamation declaring September 17-23 as “Constitution Week.” The proclamation is being displayed at the receptionist’s desk on the second floor of Lehi City Hall until the end of September.

There are two documents of paramount importance to American history: the Declaration of Independence, which forged our national identity, and the United States Constitution, which set forth the framework for the federal government that is still in use today. While Independence Day is a beloved national holiday, fewer people know about Constitution Week, an annual commemoration of the living document that upholds and protects the freedoms central to our American way of life. This year, the annual celebration begins September 17, 2016.

The DAR initiated the observance in 1955, when the organization petitioned the U.S. Congress to dedicate September 17–23 of each year to the commemoration of Constitution Week. Congress adopted the resolution, and on August 2, 1956, President Dwight D. Eisenhower signed it into Public Law #915. The celebration’s goals are threefold: to encourage the study of the historical events that led to the framing of the Constitution in September 1787; to inform people that the Constitution is the basis of America’s great heritage and the foundation of our way of life; and to emphasize U.S. citizens’ responsibility to protect, defend and preserve the Constitution.