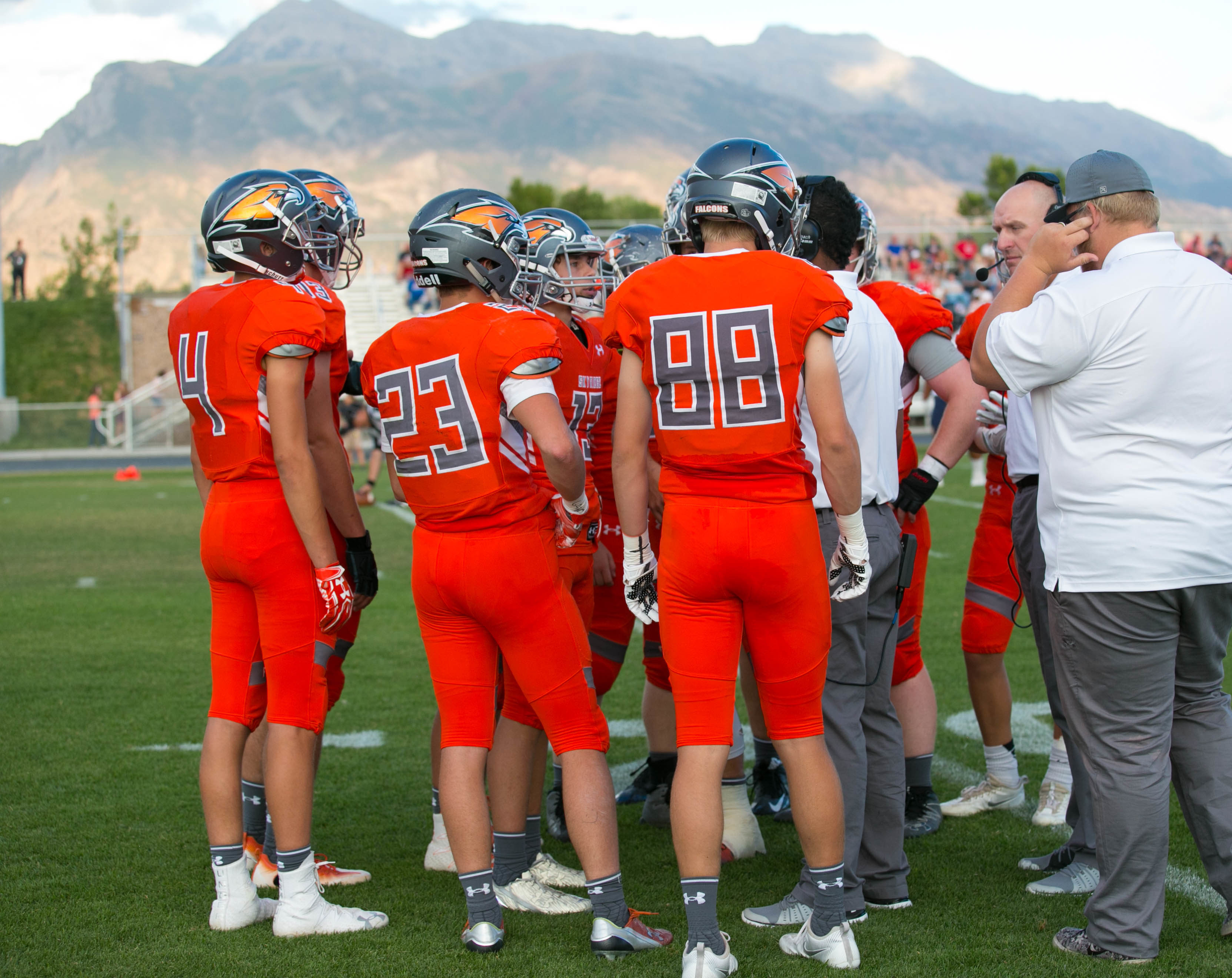 Coach Lehman and the Skyridge Falcons went on the road to play Timpanogos in their first region game of the year. Both teams were 2-1 coming in and Timpanogos was motivated to win their Homecoming game.

Skyridge received the kickoff and used their superior size on the line as seniors Scott Larsen, Corbin Hampton, Mitchell Lott, Britt DeMarco and Junior Ben Read opened up huge holes and marched down the field on a ten play, 67 yard drive. The drive concluded with an 8 yard touchdown pass from Cody Frampton to Colby Samuels. Charlie Legaspy added the extra point and Skyridge led 7-0. After a long kickoff return by Timpanogos, the defense held and Timpanogos missed a long field goal. On the first play for Skyridge, Brendan Roper ran through a huge hole and raced to the end zone untouched for an 80 yard TD run to make the score 14-0. After teams traded punts, Jeremy Hansmann pinned Timpanogos inside the 1 yard line. On the first play Timpanogos fumbled and Mitchell Sampson pounced on the ball in the end zone for a 20-0 lead ending the first quarter.

In the second quarter it was more of the same as Cody Frampton had a one yard touchdown run and senior quarterback Connor Meinzer got into the action tossing a 10 yard touchdown pass to Colby Samuels for his second TD of the game. This touchdown came after what many would call the play of the night as 350 pound defensive tackle, Matt Raass intercepted a pass and rumbled for 10 yards dragging the entire Timpanogos offense with him. It was 34-0 Skyridge at halftime. Timpanogos’ only fireworks of the first half came at halftime as they had an amazing firework show to celebrate Homecoming.

In the fourth quarter Wyatt Parkinson scored on a fly sweep for 60 yards as he raced untouched into the end zone. Timpanogos scored two meaningless touchdowns in the fourth to make the final score 53-21.

Skyridge ran for 381 yards on the night and created six turnovers on defense. Brendan Roper ran for 140 yards and Josh Hadfield had an even 100. Jeremy Hansmann and Jaxon Peck led the defense with 6 tackles and Jaxon Peck had his third interception in as many games. Jordie Chapman, Matt Raass and Garret Rusick also had interceptions. The defense held Timpanogos to only 208 yards and only 15 of 43 passes were completed. It was an impressive performance all the way around. Skyridge goes to 3-1 overall and 1-0 in region competition, traveling to a tough Corner Canyon team Friday at 7:00 p.m.

Lehi Upsets Riverton at Their Homecoming 49-13