Lehi Vintage Vignettes: The “Blue Goose” and the FFA 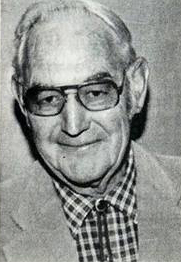 The old 1951 Chevy pickup truck we called the “Blue Goose” had fifteen FFA members packed into the back bed and five more stacked in the cab as our agriculture teacher, Byron Memmott, tried to shift into 2nd gear. He finally gave up and said, “Billy, can you reach the gear shift and give me 2nd gear?”

“Sure,” I said. When we got up to about 25 mph he called for 3rd gear and I proudly ground the lever into 3rd. We were on a field trip to Ellie Fox’s dairy farm at the point of the mountain with the Lehi High School Chapter of the FFA to spend an hour with Mr. Fox showing us how a dairy is run properly and profitably.

It was a school day in early spring and rain had turned the corral into green poop soup. Some of the fellas wouldn’t walk from the parking lot into the milk barn because they didn’t want to get their shoes dirty and stinky. “You don’t git out here into the milk barn, you don’t get a grade today!” said Mr. Memmott. Stan Cook cussed and Skip Oxborrow leaped on the back of “Hoofbeats” Clark for a piggy-back ride as “Hoofbeats” stomped violently through the muck and into the barn laughing and splashing all the way. “Look at the size of those udders,” said Tony Evans. “That’s it!” yelled Byron. “Not one more word out of you yayhoos.”

We knew he followed up with consequences for bad behavior so the chatter and barnyard antics stopped…for a while. Eldred Fox gave us a one hour lesson on his blue-ribbon dairy farm. All the boys giggled nervously as one by one they attached swollen udder appendages to the new milking machine. For some strange reason, every time the word “teats” was used, many of the boys got red faces.

Ellie’s son Merrill guided us through the whole milk production procedure until it was time to go back to the high school. Ellie’s older son Kay was there feeding the cows and as we wedged ourselves back into the “Blue Goose” he whispered to Mr. Memmott about some rocks that had found their way into the back of the truck. Byron walked back and asked for the rocks. Jack Warden and one of the Ault boys (either Alvin or Clarence) handed them to Mr. Memmott claiming they were “not mine.”

About halfway into town we heard a loud BANG and saw a mailbox explode from its standing post with cheers of nervous laughter from the back of the pickup. The “Blue Goose” pulled to the side of the road. Mr. Memmottt walked back and said, “Whoever smashed that mailbox can git outta the truck right now and go apologize to the people who live in that house…then rebuild their mailbox.” No one moved nor was a word said. He stood there for about ten minutes staring down every boy. “I got all day,” he said.

Finally, someone nodded toward another future farmer and Byron asked the guilty boy to exit the truck. “Did you do it?” he asked. “Yeah…it was me,” came the reply. “One of the best throws I ever made,” he said under his breath. “WHAT DID YOU SAY?” Byron yelled as he grabbed hold of the boy’s neck. The perpetrator was knocking on the door of the house when the “Blue Goose” headed back to the high school.

Mr. Memmott later called the homeowner to verify the repairs had been made. Oddly, the cafeteria seemed to clear as the future farmers had lunch that day and the sloppy joes took on an udderly different taste. “G” Smith made us leave our shoes in the hallway outside his classroom. Miss Fox covered her nose to get through the day. After that, we heard the faculty demanded Mr. Memmott never schedule a first period field trip again. The sophomore boys of the FFA received the “odorous honor” of washing off the green floor of the “Blue Goose.”