“Get Outside!” The Games People Play 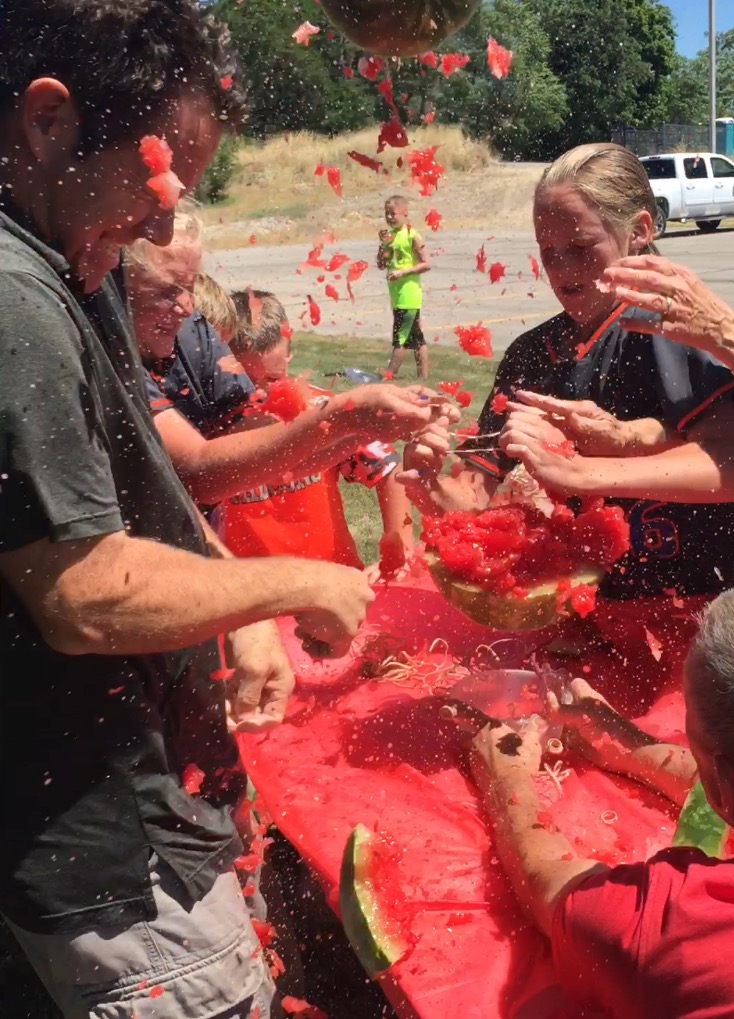 Got a reunion coming up? Are you looking for some fun new outdoor games to play with the kids and grandkids this summer? Let me suggest a few we have had lots of fun with over the last few weeks.

Watermelon Bust: Divide into teams with 4 members to each team, give each team a watermelon and a large sack of rubber bands that will stretch around the midsection of a melon. Have each team place their melon on a table with one end in a bowl that will allow melon to stand upright.

Start the game by saying “Bust!” The goal is to place rubber bands around the middle of watermelon as quickly as possible, working in pairs with both members of a pair holding opposite end of rubber band and quickly stretching band over end of melon and placing in middle. The winner is the first team using two pairs of people to stretch bands around melon until the pressure of the elastics causes a colossal conclusion to the contest!

Second and third places may be determined by continuing the game until all melons are mangled…and eaten if you can’t stand the thought of wasting a 5 buck watermelon.

Dunk Tank: Want a great way to cool off on these hot summer afternoons? May I suggest renting a dunking tank? At our last family reunion I was in charge of the outdoor games. We checked around and found a large Dunk Tank available to rent at Party Land in Orem. It towed behind my truck easily and setting it up wasn’t too bad either.

After filling the tank and setting the trigger up to release the victim into the cold plunge the fun began. Some soft training softballs proved to be the perfect projectiles to throw on this particular tank. The young boys threw more pitches than they ever would have at ball practice. The only rules were that in order to throw at the bullseye you had to be willing to sit on the hot seat…or should I say “cold seat! This was a great hit and everyone was entertained for several hours.

Hunger Games: This contest is loosely based on the popular movie. To begin with you accumulate several different weapons to be used in the battle. Soft plastic balls, nerf footballs, Frisbees, nerf guns and rocket launchers. Soft plastic baseball bats and plastic water bottles are what we used.

The weapons are placed in a small kids wading pool, all contestants are then required to back away from the weapons cache to a distance of at least 50 feet. At the command of the games official “Let the games begin” all contestants are free to dash in to gather arms or to retreat to hide.  After 1 minute the contestants are allowed to try and to “kill off” other competitors by throwing the balls, shooting the projectiles, or squirting them with “poison water.” Alliances can be formed, or you can go it alone whatever you choose….beware of double crossers, however. The object of the game is to be the last man standing.

Whatever you choose to do the object is to “Get Outside” and have some good clean fun with family and friends!!