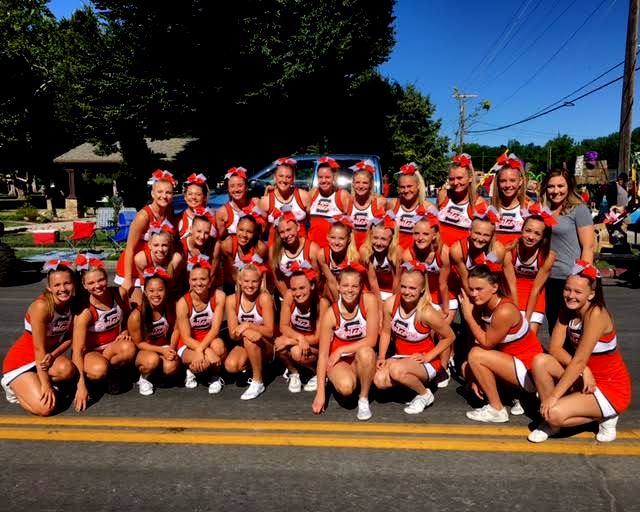 The Skyridge cheerleaders haven’t had a chance to cheer during any games for their school yet, but they’ve already won awards. At the University of Utah Cheer Camp during July, the junior varsity and varsity cheer squads for the brand new Skyridge High School each won first place in Sideline, Cheer, and Extreme Routine categories, as well as taking the Over-all Champ awards.

At the beginning of the week-long camp, the cheer teams (approximately 15 teams were at the camp) were taught a basic cheer and dance routine. The teams changed the words of the cheer to fit their school and added stunts to the cheer and the dance to make it their own. For the Sideline category, the squads were given a game scenario and they had to have a cheer ready. The Skyridge cheer team captains held nightly “devotionals” at camp where they talked about Olympic athletes who have overcome great adversity to be champions. The goal of the Skyridge cheerleaders is to practice like champions.

Nina Sengpaseuth, Rylie Anderson, Maggie Rowland and Melissa Belnap became stunt champions at camp by performing a stunt sequence perfectly in every round of competition. Photo courtesy of Ciera Stanley

Ciera Stanley, cheer coach for Skyridge High School, has been impressed with her talented and unified team. They have been very disciplined and consistent in their hours and hours of practice over the summer – most of which they’ve had to do in the Lehi Junior High cafeteria while construction of the new high school was being completed. Stanley and her assistant coach Darcie Peirce have stressed to their team that they need to be an example, to be careful what they put on social media. The team has achieved their unity and awards by encouraging each other, constantly working toward new goals, and going through the experience of coming to a new school together. Lessons that will no doubt carry over to life after high school graduation.