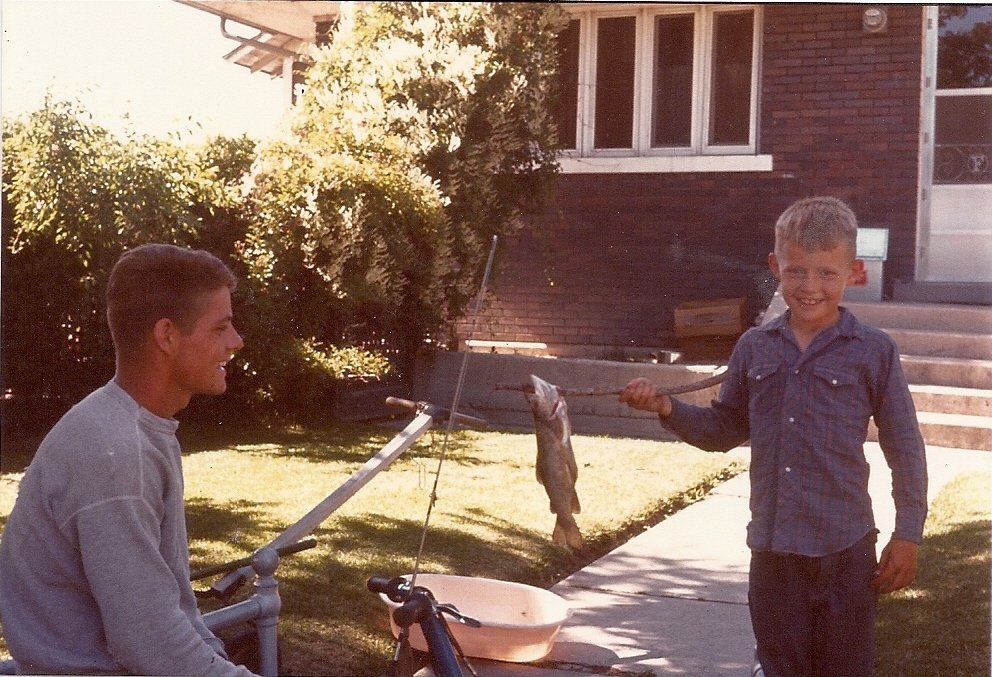 There was a huge rainbow trout I had been trying to catch for about a month up in Dry Creek during the summer of ‘58. He was trophy size and very elusive. I had seen him zoom out of a deep hole from beneath some brush a couple of times to look at my bait, but he never would take it. I could tell he was a whopper.

Then, one day I actually had him hooked and lost him when I tried to “horse” him out of the water. When I saw how big he was, I panicked and yanked hard on the line. The hook came out of his mouth as he briefly flopped against the bank and back into the water. I saw that he was bigger than any fish I had ever seen in my “long” fishing career. I nearly jumped in to get him, but ended up with shaking hands and I suspect my eyes were as big as baseballs. I was guessing he was about 22 inches long and weighed 5-6 pounds.

Finally, one day I threw a worm in and he ripped almost the whole thing off the size 12 Eagle Claw hook without the barb snagging him. Just a little piece of the worm was left dangling on the hook. I was going to replace it with a new worm, but decided to throw the nearly bare hook with that little piece of worm back in the hole one more time. I figured if he liked the ice cream, he might want to eat the cone. The second it hit the water at the top of the hole, he shot out from under the branches and nailed the piece of worm and the hook lodged in his big ole mouth.

Wow, I was in for a fight! He raced up the stream, down the stream, under the bank, back up and deep into the big hole. I finally dragged him out of the stream with my fiber glass pole bending double. I quickly threw down the pole, hopped down the bank and sat on him with one foot in the water. Then I whacked him on the head with a rock. Almost instantly I had fish remorse and wished I had thrown him back…so I could catch him again. It was too late. He was on his way to fish heaven. I cleaned him and started home.

When I was crossing old highway 91 by “Irk” Snow’s Auto Parts store, a couple of cars passed me and saw him on my willow stick. Nine year old Bert came out of the store, stared at me then threw a “thumbs up” into the air. One neighbor, Clell Jackson, stopped in his green panel wagon and asked me with a big toothy grin where I had caught him. I pointed at the fish’s mouth and said “right there in the lip!” He praised me and said, “if I were you Billy, I wouldn’t let too many fellas know you caught him up that creek. If they find out there are big trout like that up there, the whole stream will get fished out!”

There were a couple of cars with folks gaping at the Arctic Circle Drive-In, so I tucked him under my shirt with his slimy tail sticking up against my chin and ran home quickly to show mom and dad. Dad said I sure must have some Bill Laursen blood in my veins to have caught such a big fish in “that little crik.” I put him in the freezer and never let mom fry him up. He was in there for 4-5 years and every time I got in the freezer, there he was starin’ icily back at me.

I took my first date into the kitchen one night after a Gold and Green Ball and showed him off to Charlene Proctor. She just smiled and looked oddly at mom. “Gee whizzzz,” is all she said.

One day I came home and dad had given him to the neighborhood cats. There were 3-4 cats gnawing on him for a couple of days. I was pretty upset for a while. Viv Carter was delivering mail that day and saw those cats chewing away and asked about the fish. When I told him about it, he told me I could fish Carter Falls any time I wanted but that if I “caught one that big again, you gotta bring him into the house for us to see.” That sure was a green light to many wonderful fishin’ days on Lehi’s Dry Creek where my grandpa taught me to fish with a fly. He showed me how to and catch and release some fat German Browns.

“Caught some nice fish today,” I would tell my grandpa Laursen. “How do you know they were nice?” he would say. “Well, they never complained about being caught,” I would reply…and we would both laugh.