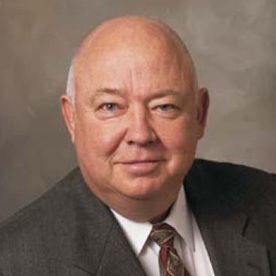 Growing up in Lehi in the 50’s and 60’s was not much different than growing up in any other rural Utah community. Boys were taught to drive farm equipment, haul hay, throw sugar sacks, and oversee herds of turkeys, cattle, and sheep at very early ages. This was the life for Dr. Paul Robinson. He is the son of the late Howard and Ada Robinson, prominent Lehi residents.

As a youth, he remembers growing up knowing everyone in town. The biggest events in his memories of Lehi High School were athletic competitions. He remembers participating in all the major sports. The one that brings back most memories is football. There were only 30 players on the team but they all played hard. Paul excelled in football his senior year and was one of several who were named as All-State teammates. Paul worked at the sugar factory under the direction of Morris Clark, unloading 100 lb. sugar sacks from train cars. This was weight training for football. He worked as a stock boy for Larsen’s Market, a turkey herder for Warren Goates, and a farmhand for his uncle Gene Phillips. Most young men had jobs at that time and learned early the value of hard work and responsibility.

Paul graduated from Lehi High School in 1964 and went on to play football at Snow College before serving a mission for the Church of Jesus Christ of Latter-day Saints in the Great Lakes Mission. After serving a two year mission, he joined the National Guard and concurrently attended BYU. He left school early to work to earn money to attend medical school at the University of Utah. He graduated from the “U” and went on to complete a surgical residency at Akron General Medical Center, in Akron, Ohio.

Dr. Robinson and his wife Marilyn, are the parents of 5 children and grandparents to 15. When asked why he chose medicine as a career, he responds he can’t remember any particular motivation, except for an accident when young that required the skill of an ophthalmologist. This experience left an indelible mark which led to his career in medicine. He may have also been influenced by the experiences of his youth—hauling hay, thinning beets, herding turkeys and cleaning chicken coops—convincing him he did not want to be a farmer.

Congratulations to the Winners of the Lehi Round-Up Stock Parade!