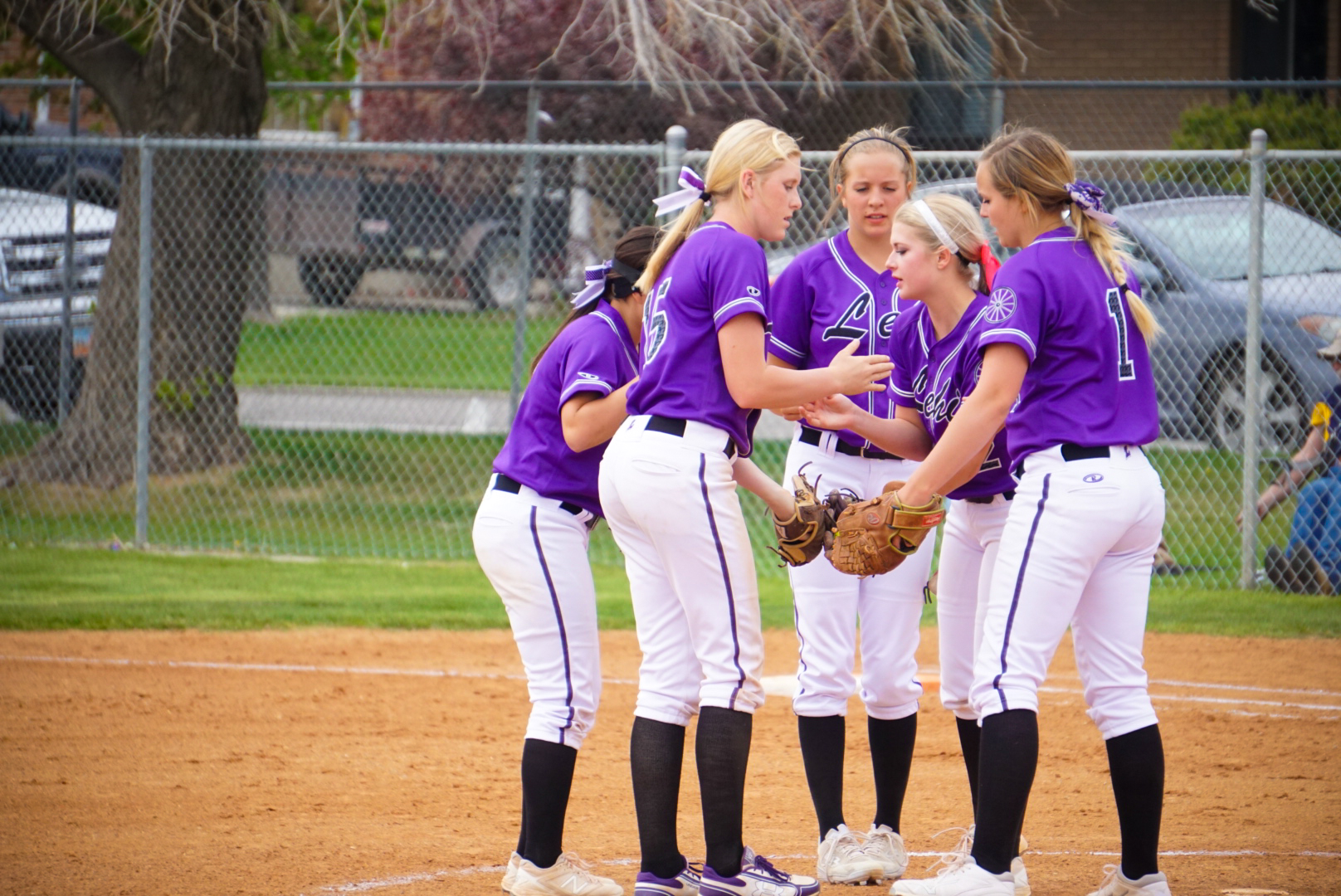 The Pioneers had a region contest at home last Thursday against the Pleasant Grove Vikings.  This game only went six innings as the Lady Pioneers won 10-0 on run rule. The first Viking batter hit the ball to left field but that would be only 1 of 2 hits for the entire game for the Vikings. The Pioneers showed why they are the state champions two years running by scoring in nearly every inning and taking advantage of every opportunity. The Lady Pioneers scored 2 runs in the first with a single by Syd White. Bailey Tahbo was then hit by a pitch.  Syd stole third base and home to score. Bailey was scored by a sacrifice fly by Brogan Kirby. The third inning started with Bailey Tahbo singling and then Stefani Zimmerman blasting a two run shot over the right center field fence. Lehi ended the inning ahead by a score of 4-0. They then put three runs across the plate in the fourth inning with a double by Syd White, Bailey Tahbo being hit by another pitch and Stefani Zimmerman hitting a double to score Syd and Bailey.  Alli Butterfield had an RBI single up the middle to score Stefani. The sixth inning was the icing on the cake as Syd White started it off with a double followed by a home run by Bailey Tahbo, the first of her high school career. Stefani Zimmerman singled up the middle. A pinch runner, Alexis Leavitt, was put in for Stefani. She advanced to second on a passed ball, went to third on a fly ball to right by Alli Butterfield and then came home on a passed ball to end the game and give Lehi the 10-0 win.  Lehi ended the game with 10 hits while only allowing 2 for the visiting Vikings.

The Lady Pioneers went on the road last Friday to face off against the top ranked Bingham Miners and came away with a 5-2 victory. Stefani Zimmerman went the distance in the circle giving up only 3 hits and striking out 7. The Pioneers started things off in the first inning when Sydney White led off with a walk. After a pair of batters struck out Brogan Kirby lined a shot to right field to move White to third. Alli Butterfield then stepped in and lined an RBI shot up the middle to score White. Lehi’s defense then shut the Miners down 1-2-3 to end the first. Lehi went scoreless in the top of the second. Bingham’s leadoff batter in the bottom of the second inning (B. Manuel) got things rolling for the Miners as she took the first pitch over the center field fence for a home run. B Roberts then reached on a Lehi error and made it safely to 2nd base.  After another error on the Lehi side the score after 2 stood at 2-1 for the Miners. After a scoreless 3rd inning the Pioneers came alive as Kayla Roberts got on with a walk, Abby Barnes singled and moved Roberts to second and into scoring position. Abby Padilla then roped an RBI double to the center field Fence to score Roberts and set the stage for White. With 1 out and runners on 1st and 2nd and a 2-0 count White Blasted the next pitch over the center field fence for a massive 3 RBI shot to move the Lehi lead to 5-2. Turns out that was all that was needed as Zimmerman and the Pioneer defense settled in to shut the Miners down for the remainder of the game. White and Zimmerman ended the game with 2 hits a piece while Butterfield led the team on the day with 3.  As a team the pioneers wound up with 10 hits. The win moves the Lady Pioneer record for the year to 19-6 overall and a region mark of 7-1. Next up for the girls is a home game on Monday against AF.

The Lady Pioneers had a home contest on Monday of this week. They faced the American Fork Caveman in a region game. Lehi held the caveman scoreless for the first five innings.  In the first inning the pioneers managed to get three hits but weren’t able to push any runs across the plate.  The first real action for the Lady Pioneers came in the bottom of the third when Syd White walked and then Bailey Tahbo bunted her to third. Syd was then able to steal home. The next two batters for Lehi got out and they ended the inning up 1-0. The bottom half of the lineup came alive for Lehi in the fourth inning. Alli Butterfield got on with a hit to center and then Brogan Kirby walked. With runners at first and second Kayla Roberts had a sacrifice bunt to move them both into scoring position. Shaylee Swenson then came up to the plate and hit a shot, her first homerun of the season, over the left center field fence to score three runs and give the Pioneers a 4-0 lead. The top of the fifth started with Bailey Tahbo hitting a single to right field.  Stefani Zimmerman came up and hit the ball to third, American Fork bobbled the ball and tried to throw out the runner at second but it wasn’t in time. Lehi now had two runners on. The runners advanced on a passed ball and then Alli Butterfield hit a shot to the shortstop.  She was out at first but scored Bailey from third.  The Caveman’s only run came in the top of the sixth when Lehi tried to throw out the runner leading off of second base. She advanced to third and an attempt to throw her out at third ended up in the dugout. She was advanced to home as the ball was out of play. The Pioneers broke it open in the bottom of the sixth. They scored five runs on six hits.  This was too much for the American Fork Caveman to overcome. The final score was 10-1 for Lehi. Syd White pitched a complete game and only allowed 2 hits with 8 strikeouts.  This makes them now 20-6 with a region record of 8-1.

Another Sweep for Lehi Baseball